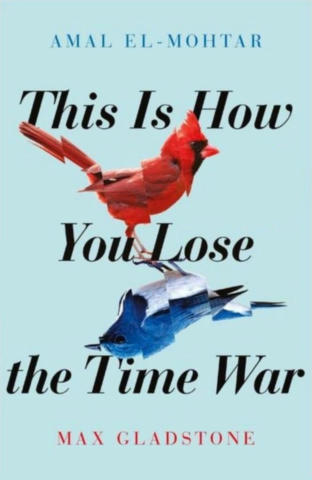 This Is How You Lose the Time War

This is the story of two time-travellers – Red and Blue – who fight on opposing sides of a war to influence the fate of the universe. They jump between strands and threads to make subtle changes to history, to favour the eventual evolution of their shady overlords: the Agency and the Garden.

I thought this would be a door-stop sci-fi novel; I was pleasantly surprised. It’s a series of letters left by Red and Blue for each other, spread across their various missions. We focus on their growing feelings and friendship – later romance – rather than the mechanics of the war around them. It’s a charming read; they both have distinct characters and forms of writing.

It’s a lot of short chapters (a brief setting of the mission, then the letter they receive), which made it a little hard to hold my attention – my mind kept wandering elsewhere – but I did enjoy it.

Overall a fun and pleasant read, and one I could imagine revisiting.