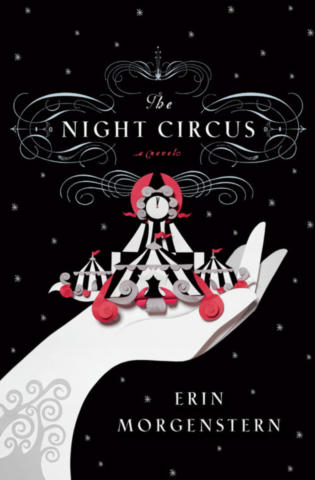 This was originally recommended by kaberett, who really likes it. I read a couple of chapters at their house, but didn’t revisit it for another six months.

The plot is complicated and quite windy – the titular circus is a travelling event, with elements of real magic and illusion mixed into the spectacle. The circus is the backdrop for a competition between two students (Celia and Marco), whose mentors set them on a contest of skill and endurance. Rather than try to summarise more of the plot (see Wikipedia for that), how did it make me feel?

I really enjoyed it. The imagery and characters are gorgeous, and the mixture of narratives and timelines worked far better than I’d expect. The book jumps around a lot, and initially I was quite confused – how do all the strands tie together? I was expecting to be confused at the end, but in fact I felt like I completely understood it at the end. That’s rare. The different threads do join up, but in such a subtle way that I barely noticed it happening.

Every scene set in the circus is beautiful, but not at all flashy. Naturally, I want to pay it a visit if it ever comes to town. And the characters are thoughtful, well-rounded people – nobody is a flat caricature or a stereotype.

I’ll surely read this again at some point, to spot things I missed on the first readthrough – in the meantime, this was a fun book to read, and I’m glad I did.