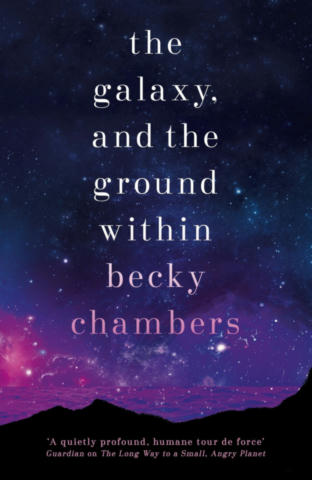 The Galaxy, and the Ground Within (Wayfarers,)

This is the final book in Becky Chambers’s Wayfarers series, and like the other three books I loved it. I re-read the series before finishing this one, so I could savour the universe.

It’s a different story again – almost the entire book takes place within a single habitation dome, a sort of space-motel. The characters are the residents, the owner and her son, sheltering in-place until an external crisis is resolved. (Hmm.) All the characters are alien species, with only a very brief appearance by a human.

I love how alien the aliens in this series feel. They aren’t humans with green facepaint – they have totally different cultural norms, social structures, physical biology. It makes you question your own norms, and the lack of humans in this book really works.

This book feels more overtly political than some of the others – there’s pointed commentary on war, bodily autonomy, and colonialism (including a jab at museums!).