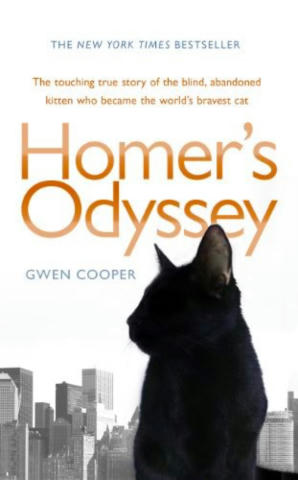 This is a heartwarming story about a black furball who had his eyes removed two weeks after birth, and how he made his way in life as a blind cat. Of course I enjoyed it.

The book starts from Homer’s adoption, and moving into a household with Gwen and two other cats (Scarlett and Vashti). It follows their shared life – trying to make way in Miami, moving back in with Gwen’s parents, moving to New York, the events of 9/11, and moving in with Gwen’s future husband Laurence.

Homer is a lively cat, seemingly undeterred by his blindness (possibly because he was never able to see), full of affection and joy.

It’s interesting to read about how differently he perceives the world – the idea that, for example, he meows to announce something’s presence to Gwen, because to him anything inaudible is non-existent. There’s also an incident where somebody breaks into Gwen’s house, Homer goes to defend her, and is clearly more at home in the dark than the burglar.

There are a few harrowing moments – an aggressive boyfriend, 9/11, and a health scare – which were unsettling, but mostly I found it a nice and heartwarming book. I read the whole thing in an evening, because I didn’t want to put it down.

I wasn’t sure if I’d like a pet memoir, but I really enjoyed this.