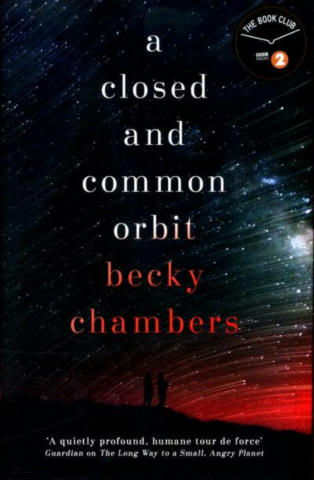 A Closed and Common Orbit (Wayfarers, #2)

I very much enjoyed this book. Another thoughtfully-written story in the Wayfarers universe.

When I first heard of this, I assumed it was a sequel to A Long Way to a Small Angry Planet. Technically, it is (we meet the two main characters there, and narratively it continues) – but in practice this could be read as a standalone book. There are two stories running in parallel – Sidra, née Lovelace, trying to understand the sensations that come with her body kit – and Jane 10, now Pepper, finding her way off the planet outside the factory where she was enslaved. Both are very thoughtfully-written, and really capture the character they follow.

Sidra’s story is one of dysphoria, and trying to find a new purpose in the world. It’s very carefully written, and Sidra’s thoughts build up in a nice way. We see her begin to have new emotions and desires – grow up, in a way – and so although in some ways she’s very petulant and stubborn, I really cared about her at the end of the book.

Jane’s story is similar – finding a place in a new world, but told from the view of a literal child. I was really impressed with the way the author captures a child’s voice – it feels like a 10-year-old girl at first, and subtly shifts as the book goes on.

At times, I felt like we cut between the stories a bit too quickly. There were only moments in their lives, and I’d have liked to see some scenes fleshed out in a bit more detail. Just as I became engaged in a scene, it flipped to the other person.

As with Planet, this book focuses on characters at the expense of plot. You get characters you really care about, but there’s no genuine suspense, and it’s no surprise that things wrap up nicely. This series is definitely a comfort read, not an action thriller.

Overall? I really enjoyed the book. I loved both the main characters, and thought it was written with a lot of care and finesse. Roll on book 3!